Microsoft’s Surface range has always experimented with form factors and design, starting with its original 2-in-1 Surface RT, now evolved into the light and portable Surface Pro X. That experimentation has continued with the

, which merges the most conventional of the line, the Surface Laptop, with elements of the desktop Studio and the high-end 2-in-1 Surface Book.

Surfaces are often classified as ‘convertible’ devices, where removing a keyboard turns a laptop into a tablet. You could argue that ripping off the keyboard isn’t converting the device, and you may well be right. But you certainly can’t say that about the 14.4-inch Surface Laptop Studio. 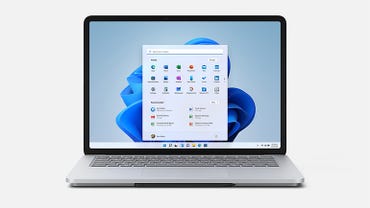 That’s because it truly is a convertible laptop. At first glance, it’s a laptop: it opens like a laptop and has a conventional keyboard. But if you reach for the top of the screen, grab it at either side and tilt it back, you’ll quickly see why it’s different.

If you’ve used a Surface Book, this is equivalent to flipping around the screen and folding it up like a tent. With Surface Laptop Studio the process is a lot simpler, there’s no pressing buttons and waiting for memory wire to release, and no having to shut down applications that are using the GPU. Instead, it’s a quick lift forward and a click into the magnets in front of the keyboard. This is an ideal position for watching videos, making presentations, or working with an external keyboard.

Pull the screen forward again and it folds down against the keyboard, into ‘Studio mode’. Here you’re working with it as if it was a tablet, with the screen at a slight angle. This mode is for pen users, either carrying it like a slate or working with graphics tools like a Cintiq or a similar pen-driven screen. Pair it with a Bluetooth keyboard and you’ve got everything you need for an on-the-road photo processing system, especially if you buy one of the higher-end SKUs with 1TB or 2TB of storage.

I’ve been testing an 11th generation Core i7-powered Surface Laptop Studio with 32GB of RAM and 1TB of SSD storage for the last couple of weeks, using it for photography post-processing, general productivity applications (mostly working on copy edits for a book), some software development, and a little gaming. It has replaced a similarly specified 15-inch Surface Book 3, which has been my main machine for nearly two years.

First impressions of the Surface Laptop Studio are good; I’ve been intrigued by fold-forward screens since Intel showed off concept devices that used a similar approach back in the early 2000s. It’s taken a while for the technology to ship, but it’s here now and Microsoft’s implementation with a fabric hinge in the screen works well.

The keyboard is one of Microsoft’s best, mixing the feel of the Surface Book’s keys with the looks of the Surface Laptop. They’re slightly recessed, making your typing position comfortable. The trackpad is large, with spacious wrist rests, and it’s placed where you can quickly work with the mouse pointer.

The 14.4-inch screen is a little smaller than the 15″ Surface Book’s, but small bezels and curved corners make it feel plenty big enough. It’s also a lower resolution than the Surface Book’s 3000 by 2000 (267ppi) display, clocking in at 2400 by 1600 (201ppi). The big difference is refresh rate, with support for 120Hz for smoother scrolling. Still, I found the screen felt similar to the Surface Book’s with good colour range and excellent blacks. This makes it an ideal machine for processing photos, with its discrete 4GB Nvidia GeForce RTX 3050 Ti  GPU providing plenty of power for Lightroom’s machine learning-based image upscaling.

That GPU is one of the selling points of the Surface Laptop Studio. Alongside the CPU-integrated Intel Iris Xe, it’s a way of quickly boosting device performance where necessary. As it’s an RTX 3050 Ti, you get access to Nvidia’s Broadcast suite of camera and audio processing tools that can help improve the quality of your video meetings by using machine learning to filter out the sound of your typing, providing a high-quality background blur, and using face tracking to keep you in the centre of the frame.

One drawback is a relative lack of ports. If you’re used to the Surface Book’s three USB (two A and one C) ports and SD card slot, you’re going to find the Surface Laptop Studio’s two USB-C ports somewhat limiting. Yes, they are Thunderbolt 4, so you can use them with a docking station, but if you’re planning to download photos from a camera, then the lack of SD card slot is a significant omission. I’ve been able to find a decent USB-C mini-dock that adds the missing ports for me, but it’s something else to carry.

Power is delivered over the familiar Surface Connect adapter, with a bundled 120W power adapter. You can also charge over the USB-C ports, using a PD PSU that provides at least 100W. This lets you work with a Thunderbolt 4 docking station or Microsoft’s own Surface Dock, both of which allow you to you drive additional displays.

From the top, the Surface Laptop Studio might be the most MacBook-like Surface yet. The keyboards are similar, as are the oversized touchpads. But turn the Laptop Studio over and the differences are clear. Microsoft has designed its device around a plinth that maximizes airflow over its processor and GPU. It’s not something you notice when working on a desk or typing on your lap, but it does feel slightly unusual when you pick it up and use it like a tablet. Finding the right grip can be hard, especially when you’re getting used to the device. If you’re right-handed, hold it with the USB ports down when using it as a tablet for the best grip (or on top, if you’re left-handed).

That plinth serves another purpose, it’s where the Surface Slim Pen 2 is stored. There’s a wireless charger to keep your pen charged and yet more magnets to hold it in place. They’re surprisingly strong and hold the pen firmly. Usually, the pen is an additional cost ($129.99, currently on offer at $118.99), but pre-orders were able to get the pen for free.

Microsoft has done a good job matching the pen tip and screen coatings, and the Surface Laptop Studio has the nicest inking experience of any Surface. However, we’re still waiting for many of the promised haptic features that are due in Windows 11 and Office. Where haptics are obvious is the large touchpad. While it feels like it’s moving when you tap it, it’s actually very convincing haptics in action.

Ready for the road warrior

Performance is good, as is battery life. Our Surface Laptop Studio with a Core i7-11370H and 32GB of RAM delivered Geekbench 5 scores of 1118 (single core) and 4867 (multi core), compared to 998 and 3592 from the Surface Book 3. However, its 4GB Nvidia GeForce RTX 3050 Ti  GPU did have a lower OpenCL score — 58283 versus the Surface Book 3’s 60631. Still, there’s plenty of power here, and the Surface Laptop Studio didn’t struggle when processing a batch of photographs in Lightroom, or when playing recent games (although gaming did turn on the fans).

You should get most of a day’s work out of the Surface Laptop Studio’s fully charged 58Wh battery with workloads including Wi-Fi, web browsing and Office apps. Video and gaming will cut that down a fair bit, so you may prefer to have a power supply with you. One point to note: if you’re using the Surface Laptop Studio on your desk it’ll switch into Windows 11’s new smart charging mode, topping out at 80% and keeping a trickle of charge to avoid damaging the battery. You can switch back to normal charging from the bundled Surface app if you’re planning on being away from your desk.

If you’ve been using Microsoft’s Surface devices, you’ll find the Surface Laptop Studio a pleasing upgrade. If you opt for the higher-end Core i7 specification, you’ll get a portable discrete-GPU workstation that handles most creator and developer tasks with ease. It might not be cheap, but it can handle everything from machine learning to gaming, and features one of Microsoft’s best screens to date, which quickly converts from studio to stage to laptop.

Innovative and powerful, the Surface Laptop Studio is a worthy machine, with design chops to compare with the MacBook Pro. Just be ready for all the magnets!

Avoiding Surface tension: Why Microsoft closed a Book to open a Studio

The best Surface PC: Which Windows 11-ready Surface device is right for you?

The best 2-in-1 laptops: Top flexible, hybrid, and convertible notebooks